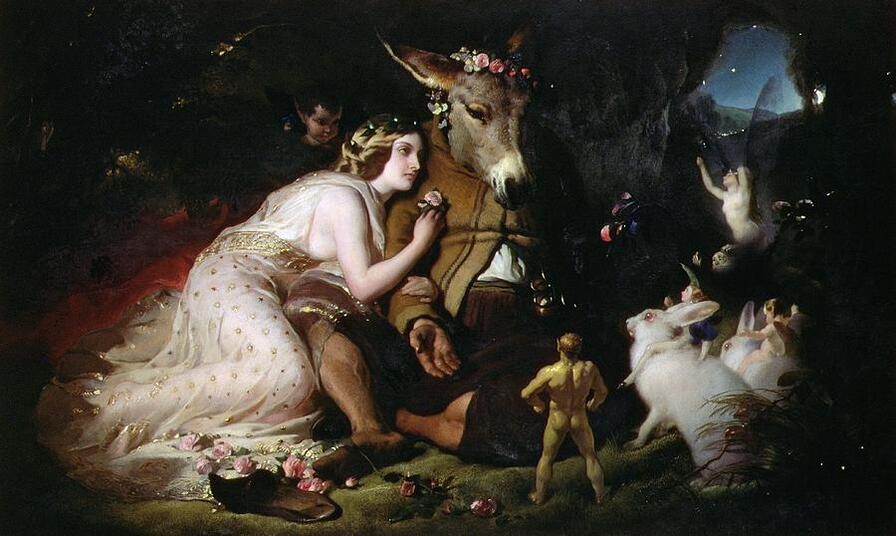 A Translated Nick Bottom and Titania the Fairy Queen
As William Shakespeare’s A Midsummer Night’s Dream begins, Theseus, Duke of Athens, is getting ready to marry Hippolyta, Queen of the Amazons in four days. Though Theseus conquered Hippolyta’s army, he promises her that their wedding will be more joyous than her loss in battle. Meanwhile, Egeus the nobleman walks into Theseus’ court and tells Theseus to give his daughter, Hermia, the death sentence if she doesn’t comply with the arranged marriage with Demetrius. Theseus tells Hermia she has to decide whether to marry Demetrius,  die, or become a nun . Later, Hermia and Lysander plan to run away from Athens and to the house of Lysander’s aunt. Helena overhears and tells Demetrius  in an effort to gain his love. Both Helena and Demetrius go into the woods to find Lysander and Hermia to confront them.

Meanwhile, the fairies King Oberon and Queen Titania argue for custody over a changeling--a young Indian prince. Oberon wants to make the boy his personal page, but Titania refuses to give the boy to him because she wants to take care of the boy for the sake of his mother. Out of anger and frustration, Oberon orders Puck to pour love juice in Titania’s eyes and hopes that she falls in love with a monstrous beast which will both humiliate her and force her to hand over the boy to him. Oberon, after witnessing Demetrius’s abusive attitude towards Helena, also tells Puck to trickle some love juice on Demetrius’s eyes and hopes that he falls in love with Helena. Puck, mistaking Lysander as the intended target, spreads the love juice onto his eyes. He then goes on to put the love juice into Titania’s eyes. Later when Lysander wakes up, he falls deeply in love with Helena because she is the first one he sees and abandons Hermia.

The rude mechanicals, a band of Athenian citizens and aspiring actors, practice their play nearby and Puck comes along and transforms one of them, Nick Bottom, into a donkey-headed monster. The rest of the mechanicals are terrified by Bottom’s transformation and scurry away. Titania wakes up from the commotion and immediately falls in love with Bottom. Oberon sees that Titania falls in love with Bottom and his donkey head and is delighted. He then sees Demetrius and Hermia show up and realizes that Puck put love juice in the wrong Athenian man’s eyes. Demetrius also wakes up later and also falls deeply in love with Helena. As the boys swoon over Helena and declare their love to her, Helena concludes that they are playing an elaborate prank on her and gets into an argument with her childhood friend Hermia. Helena flees from a physical contest against Hermia and the boys nearly get into a fight, but gets bamboozled by Puck mimicking each of their voices and leading them separately into the woods. He then puts both boys to sleep and removes the spell from Lysander.

The next morning, Theseus, Hippolya, and their hunting crew arrive to the scene of the four sleeping youths in the woods and demand an explanation. Demetrius declares his love for Helena and Lysander reclaims his love for Hermia. Though Egeus demands Hermia  be put to death, Theseus overrides his decision and declares that the youths will be married alongside  Hippolyta and him. Meanwhile, Oberon obtains the changeling boy, but pities Titania. He disenchants Titania, and she wakes up as if everything she went through was a dream. Bottom, also disenchanted by Oberon, wakes up and speaks about his experiences with the fairies as a strange dream. He then hurries back to Athens and surprises his fellow actors with his presence.

Finally, the couples are married and are ready to watch the play performed by the mechanicals. As the play ends, the fairies appear once more and bless the marriage beds of the new couples.