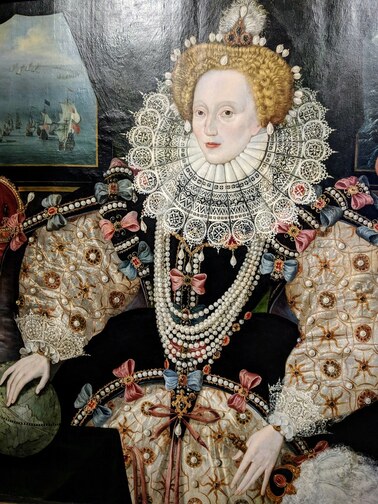 Queen Elizabeth I circa 1588
Early modern views on sexual anatomy were very different from what we currently know. Many believed that woman had basically the male genitalia but inside them, and that while in the womb, if a female fetus was heated up, then the genitalia would just fall out of her and the female fetus would become male. This belief added to the notion that women were not "whole" or perfect. Women were also viewed as "leaky," and thus unstable according to humoral theory, due to periods and weakened bladder control after childbirth. Women were viewed as contributing nothing important when it came to childbirth and solely being a vessel for sperm and the fetus when it came to childbirth. Aristotle wrote that men contributed to humanity through their semen, while women only contributed through brute matter, which was less of a sacrifice than the men. These biological notions play into social views of women during this time. Women were often seen as physically, morally, and spiritually inferior to men.

The role of women and men were very clearly defined during the period. Men were allowed to be poets, doctors, educators, actors, and architects; however, women were only allowed to remain at the house and take care of the children. Women were viewed as property, owned by their fathers until it was time to be married, when they became property of their husbands. Women were expected to have a child every year or two for their husband, due to the fact that infant mortality rates were so high and may children often didn’t make it past six.  Class, however, complicated these gender norms to a degree. For men, class dictated the types of jobs and respect you could earn, and it was very difficult to change classes. For women, if you were more well off, you’d likely have a few more opportunities (education, work, marriage) compared to your poorer counterparts, but not much. Women were valued by their physical features, childbearing skills, and chastity. When married off, especially royals or higher-class women, would be expected to be virgins. After consummating the marriage with their new husbands, their bed sheets would be inspected for blood and if there was none, then the woman would be shamed. If a husband had an affair, the wife would be to blame, rather than him. It was said that if the woman had been keeping her husband happy, this wouldn’t have happened and that’s why it is her fault. Women were blamed for many problems in the time of the Renaissance and struggled greatly looking for equality.