Students gathered data for some 100 objects.
Below is a detailed index focused on twenty-one of them.
​ 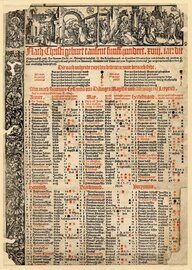 ​Almanac: An almanac is a book published annually containing a list of events in the upcoming year. The events of the book mainly focus on meteorology, weather, and astronomy.
​
​Found in A Midsummer Night's Dream:
"A calendar, a calendar! Look in the almanac. Find out moonshine, find out moonshine." 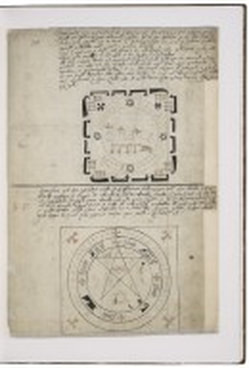 ​Book of Magic: A book of magic is a book from the early modern period with pages filled with diagrams and instructions on how to perform magic.  These pages often held religious symbols like the cross and the Star of David to protect  magicians from evil spirits

Found in Doctor Faustus:
"Adders and serpents, let me breathe a while! / Ugly hell gape not! Come not, Lucifer! / I'll burn my books — O, Mephastophilis!" 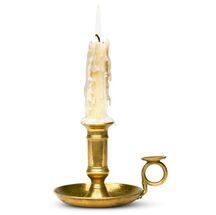 ​Candle: A candle is a stick of wax with a wick running through the middle of it. The wick can be lit, and  the candle will then give off heat and light.

Found in Othello:
"Put out the light, and then put out the light. / If I quench thee, thou flaming
​minister, / I can again thy former light restore / Should I repent me."

​Clock: This clock is made of metal and is shaped like a circle on top with support from one
leg on the bottom. It was made around the early 1600s and has both a minute and hour
hand that have the ability to strike with an alarm noise.

Found in Doctor Faustus:
[The watch strikes] "O, half the hour is past! 'Twill all be past anon." 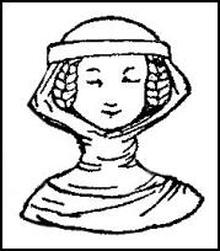 Gorgets: Gorgets were linen garments worn around the neck by women around the sixteenth century. Starch helped to keep the garment stiff and clean.

​Found in The Convent of Pleasure:
"I do verily believe, I could make an indifferent Cook-maid, but not a Laundary, nor a Dairy-maid; for I cannot milk cows, nor starch Gorgets."

Gown / Nightshirt: A gown or nightshirt would have been what a man would have worn to bed.
​It likely would have consisted of a loose and light shift, often with long sleeves.

Found in Othello:
"Zounds, sir, you're robbed. For shame, put on your gown!" 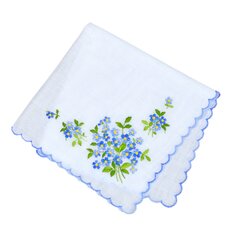 Handkerchief: Handkerchiefs were produced using materials like silk and included elaborate patterns and stitching  in order to  show wealth and status. They were used for individual cleanliness purposes, for example, cleaning one's hands,  face, or nose.

Found in Othello:
"I am glad I have found this napkin. This was her first remembrance from the Moor." 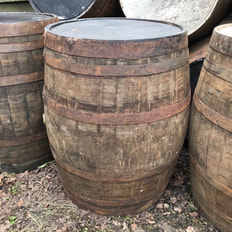 ​
Hogshead: A large cask or wooden barrel used to transport and store goods such as tobacco, wine, beer, ale, etc. Each barrel had a typical capacity of sixty-three gallons.

Found in Doctor Faustus:
"My father was a gammon of bacon and my mother was a hogshead of
​claret wine." 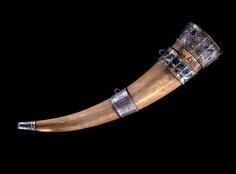 Hunting Horn: Hunting horns were used primarily by the nobility and royals in Elizabethan England, who would hunt for sport and military training. Typically
an animal horn, or constructed with wood to resemble one, the horn produced
a loud sound when blown into; its purpose was to send out signals and orders as opposed to making music.

Found in A Midsummer Night's Dream:
"Go, bid the huntsmen wake them with their horns." 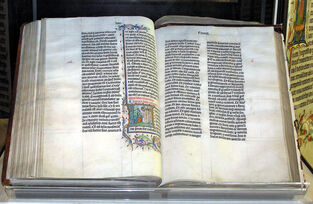 Jerome’s Bible: Jerome's Bible, or the Vulgate, was a Latin translation of the Bible from the late fourth century. Jerome’s Bible was eventually adopted as the official biblical text for the Roman Catholic Church.
​
Found in Doctor Faustus:
​"When all is done, divinity is best. / Jerome's Bible, Faustus; view it well. / 'Stipendium peccati mors est.' Ha!" 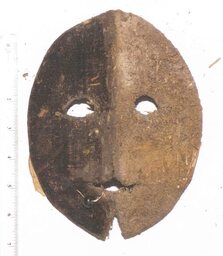 Mask (Vizard): A vizard is a mask woman wore to avoid making their face tan. A tan face indicated that the woman was outside working and, thus, lower class. Vizard masks were made from animal hide and had a little clamp inside that the wearer would bite down on to hold the mask in place. This also made her unable to speak.

Found in The Roaring Girl:
"As caves / Damn misers' gold, so masks are beauties' graves." 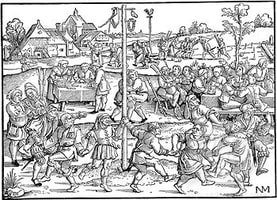 Maypole: A maypole is a tall wooden pole erected that is to be woven around with ribbons and decorated with flowers during pagan and later medieval European festivals.

Found in A Midsummer Night's Dream:
​"How low am I, thou painted maypole?" 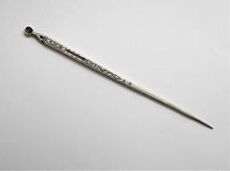 Needles: Tools used for embroidery and needlework, as well as to keep clothing in place.

Found in A Midsummer Night's Dream:
"With our needles [we] created both one flower,  / Both on one sampler, sitting on one cushion." 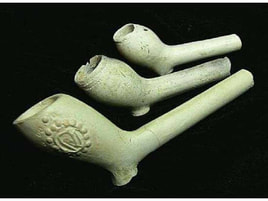 Pipe: Pipes, such as white clay ones, were popular--alongside tobacco--in seventeenth-century England. A wooden stem would have been attached to the end of the bowl.

Found in The Roaring Girl:
"The pipe's in a good hand, and I wish mine always so." 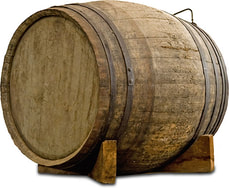 Rhenish Wine: Rhenish wine is wine originating from Germany in areas near the Rhine river. Rhenish wine was relatively cheap and consumed mostly by common folks in Elizabethan England. Rhenish wine was shipped and stored in casks or barrels until the twentieth century.

​Found in Doctor Faustus:
"He took his rouse with stoups of Rhenish wine." 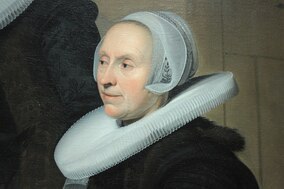 Shag Ruff: The shag ruff  is a small, circular fabric ruffle worn on the neckline. These pieces of formal attire, usually made from either linen or lace, prevented high quality clothing  from being soiled.

Found in The Roaring Girl:
"I cannot stay now, i'faith. I am going to buy a shag ruff; the shop will be shut in presently." 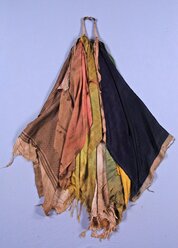 Silk-Damask: Silk-damask was a luxury handwoven fabric made of silk, often reversible with two different sides. Silk-damask originally came from China and made its way to Europe around the 1400s.

Found in The Convent of Pleasure:
"In the Spring, our Chambers are hung with Silk-Damask, and all other things suitable to it." 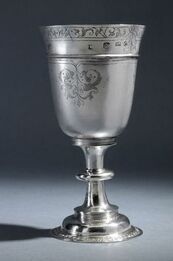 Silver Cup: The silver cup was a commodity among people of power and wealth. The cup would usually be filled with wine at gatherings and dinners among society's finest.

Found in Doctor Faustus:
"Sirrah Robin, we were best look that your devil can answer the stealing of this same cup, for the vinter's boy follows us at the hard heels." 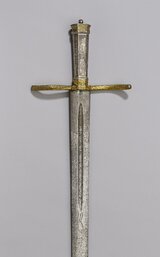 Sword: During the early modern period, swords were both weapons and fashion accessories. Soldiers fought with them in battle, but nobility and gentlemen also wore them as part of their attire, especially on formal occasions.

Found in A Midsummer Night's Dream:
"Hippolyta, I wooed thee with my sword / And won thy love doing thee injuries." 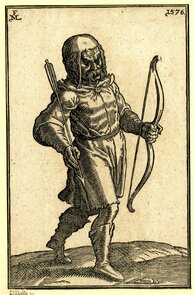 Tartar's Bow: A type of bow used by Tartar soldiers. Tartars were Turkic-speaking people from various backgrounds; however, most were from western Asian countries such as Russia, Kazakhstan, and Mongolia.

Found in A Midsummer Night's Dream:
"I go, I go, look how I go, / Swifter than arrow from the Tartar's bow." 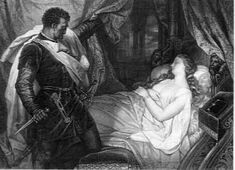 Wedding Sheets: The wedding sheets were used for comfort, but they  also had a social implication. These sheets were for the couple to consummate their marriage on and were examined after to check if the wife was a ‘true virgin."

Found in Othello:
"Prithee, tonight Lay on my bed my wedding sheets. Remember, / And call thy husband hither."