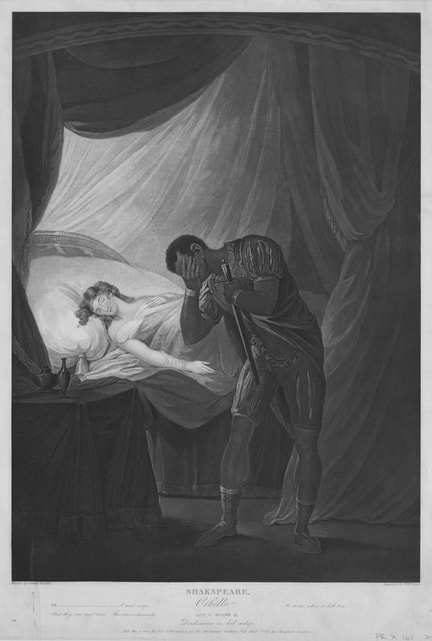 Othello Kills his Wife, Desdemona, on their Marriage Bed
Othello, written by William Shakespeare, is a tragedy in which a powerful Venetian  general’s life and marriage is ruined by an evil soldier named Iago.  Othello begins in the streets of Venice with two soldiers, Roderigo and Iago.  Roderigo hates Othello, the powerful Venetian general, because he is in love with Othello’s new wife, Desdemona.   Iago also hates Othello because Othello chose Michael Cassio for the lieutenant position instead of Iago.  Iago convinces Roderigo that they need to alert Desdemona’s father, Barbantio, who is a Venetian senator, that his daughter has run off to marry Othello.  Barbantio is appalled at this marriage because Othello is a black man and Desdemona is white.  Barbantio orders his militia to go and arrest Othello, but he is called into a meeting by the senate regarding the Turksish invasion of Cyprus.  Othello is at the meeting because he is going to command the forces that will fight the Turks.  Desdemona defends her marriage to her father, and she decides to travel with Othello, along with Michael Cassio, Roderigo, Iago, and Iago’s wife, Emilia.

When the group arrives in Cyprus, Roderigo tells Iago that he is not sure if he can woo Desdemona.  Iago tells Roderigo that there is still a chance, but that Desdemona is falling in love with Michael Cassio.  That night when they are drunk, Roderigo challenges Cassio to a duel, and when the governor of Cyprus tries to break up the fight, Cassio accidentally stabs him.  Othello is upset with Cassio and takes away his title as lieutenant.  Iago tells Cassio that he should talk to Desdemona who may be able to help him get his position back.  Iago tells Othello that he has suspicions that Desdemona is cheating on him with Cassio.  Othello is now jealous and suspicious.  Othello begins to watch his wife closely and becomes angry when she cannot find a handkerchief that he gave to her.  Iago asks his wife, Emilia, to steal the handkerchief, but does not tell her why.  Iago plants the handkerchief in a place where Cassio will find it.  Cassio picks up the handkerchief and Othello finds out that Cassio has the handkerchief.  He orders Iago to kill Cassio.  Meanwhile, Desdemona cannot figure out why Othello has changed his attitude toward her.

Iago soon convinces Roderigo to kill Cassio so that Roderigo might still have a chance at courting Desdemona, but it is Iago that ends up wounding Cassio. Yet no one can see this fact.  Iago blames Roderigo for wounding Cassio and Iago kills Roderigo for the crime.  Inside of Othello’s house, Othello goes into the bedroom to murder his wife because he thinks that she cheated on him.  He smothers her with a pillow while she still persists that she is innocent.  Emilia enters the room and sees that Othello killed Desdemona.  Othello shows Emilia the handkerchief as evidence that Desdemona was cheating on him, and Emilia then realizes what her deceitful husband, Iago, has done.  She tells Othello about Iago’s plan against him and how Desdemona did not really cheat.  Iago enters and stabs Emilia for revealing his secrets and he is then arrested and taken to trial.  Othello stabs himself after a final speech of how he hopes he will be remembered when he is gone.  The play ends with Cassio being named governor of Cyprus.