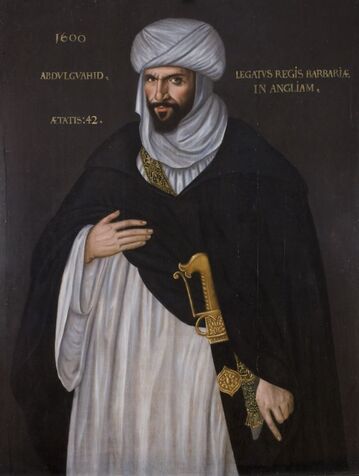 Abd el-Quahed ben Messaoud, Moroccan Ambassador to the Court of Elizabeth I in 1600
Elizabethan England is considered to be a "Golden Age"  due to the economic strength of England as a nation, religious peace, naval power and the cultural boom that occurred during this period. During the Elizabethan time period, England’s culture was thriving with the works of playwrights like William Shakespeare and Christopher Marlowe.  Shakespeare and other playwrights create complex plays that focus on issues like love, gender, wealth, power, politics, and race. While racism is not a topic that is typically not focused on as much as love or power in Elizabethan drama, it gives an important reflection of how race was viewed during the "Golden Age." In his paper, “Representation of Race in Four Shakespearean Plays: Titus Andronicus, Othello, Antony and Cleopatra, The Merchant of Venice,"  Uddalak Dutta explains the role of race in Shakespearean plays. Dutta states, “In Titus Andronicus, Shakespeare reinforces racial stereotypes. Aaron’s blackness is associated with evil, maliciousness and barbarity”(1). Here, Dutta notes that this work by Shakespeare accurately reflects how society thought of black individuals.

A major representation of attitudes toward Africans and other people of color is Shakespeare’s Othello. In the play, Othello is a black general who marries Desdemona. Despite his strong relationship with Othello, Desdemona’s father, Brabantio, does not approve of Othello marrying Desdemona and becomes enraged when he learns of their love. Brabantio confronts Othello and continues to refer to him as “the Moor." Dutta explains the significance of this word by saying, “English constructions of ‘Moor’, ‘Blackamoor’ or ‘Negro’ refer not only to differentiations of race or religion but, more importantly, refer to constructions of power and colonization.” (2) Dutta clarifies that the term “Moor” was essentially a way of demoting the status of a black individual.

Other sources argue that race did not play a prominent role in society during the Golden Age of England.  Reginald Horsman discusses the concept of race in England during the sixteenth and seventeenth century in his paper “Origins of Racial Anglo-Saxonism in Great Britain before 1850," Horsman states, “The Anglo-Saxonism of these early centuries was in large part nonracial. Although Anglo-Saxon institutions were praised, there was generally little interest in specific racial characteristics" (3). (It should be considered, however, that Horsman's article is over forty years old and might be biased or outdated.) Finally, in the BBC news article, “Britain's First Black Community in Elizabethan London," the author states that few people in Elizabethan England were not white, however, the people who were not white were considered to be more fascinating or exotic. While this isn't the same as being considered inferior perhaps, it does "other" non-whites as different or set apart.