The Convent of Pleasure
Molly Miranda 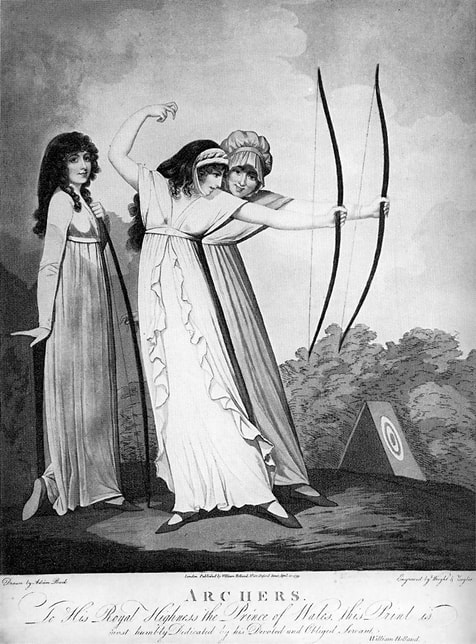 Women Archers--Forsaking the Company of Men, the Members of the Convent of Pleasure Participated in Such Leisure Activities
The Convent of Pleasure by Margaret Cavendish is a closet drama, a play not intended to be performed, about a group of unmarried women. The play was first published in a collection of Cavendish's plays in 1668. In The Convent of Pleasure, a group of women decide to ignore society's expectations of them. Led by Lady Happy, a wealthy single women, they avoid men and marriage by secluding themselves in their own community.

Act One starts with multiple monsieurs trying to get the attention of Lady Happy, as they want to be seen as possible suitors for her. Meanwhile, Lady Happy is talking to her friend Madam Mediator. The two women are discussing men, pleasure and marriage. Both of them agree that men do things only to benefit themselves. At the end of the conversation Lady Happy decides she wants to use her newfound inheritance to start an all women’s community. Her idea is to live in a secluded cloister with only women.

The male suitors return in the beginning of Act Two. They ridicule Lady Happy’s decision, but decide to try to gain her favor anyway. Madam Mediator helps them in their quest to get the women out of the convent by encouraging them to ask the state to force her out of the convent. They also have an idea to dress as women and to infiltrate the cloister. Meanwhile, Lady Happy and the other women love their new life in the convent.

In Act Three, the Princess, a notable member of the convent, notices many of the women in the community have started acting out romantic relationships. She asks Lady Happy to dress as men and act as her romantic partner. In a play within a play, the women depict what they do not like about marriage, including cheating and domestic violence. The Princess disagrees with this interpretation and argues that more people are happier in marriages than not.

In Act Five, the two women go to a dance together. Madam Mediator announces that there is a man in disguise in the convent. The Princess is confident that she will not be suspected as the culprit,  but a man comes and professes that she is a he and their kingdom’s lost prince. The Princess/Prince refuses to leave Lady Happy. Madam Mediator breaks down, upset at the thought that a man infiltrated the women’s community. She asks the men to keep it a secret, but they reveal that the news has spread and that most people already know. The play ends with Lady Happy marrying the Prince. The Prince promises her after their wedding that he will keep up the convent and open it up as a sanctuary for widows and virgins.