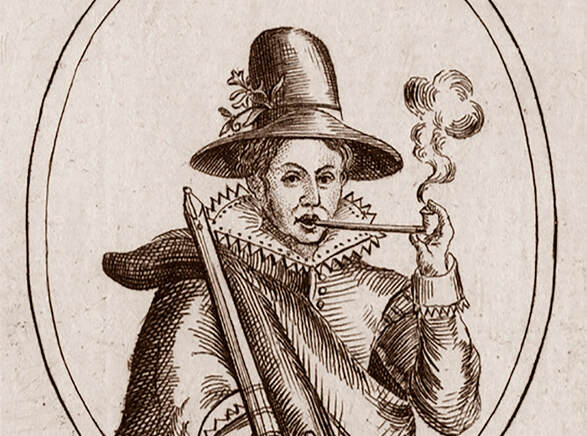 Mary Frith / Moll Cutpurse / The Roaring Girl
​The Jacobean stage play The Roaring Girl was written by Thomas Middleton and Thomas Dekker between 1607 and 1610. This city comedy was first published as a quarto playbook in 1611. The play centers around the character Moll Cutpurse, who was written to mirror Mary Frith, a real-life London celebrity. Moll is a notorious cross-dressing thief, who is often misperceived and judged by society. The rebellious writing includes many thematic aspects such as: marriage, gender, sexuality, class, prejudice, and reputation. The play’s main characters are: Sir Alexander, Mary Fitz-Allard, Mary Frith/Moll Cutpurse, Trapdoor, and Sebastian.

The first act begins by presenting the problem for the rest of the play: Sebastian is in love with Mary Fitz-Allard, but their fathers’ refuse to condone their marriage. Sir Alexander, Sebastian’s father, feels Mary’s dowry is too low and that she is unworthy of his son. While Sir Alexander had guests over, Sebastian announces to him that he is really in love with the fearless "roaring girl" Moll Cutpurse. Sebastian secretly hopes his father will allow him to marry Mary, as she is a more suitable option in the eyes of society. Outraged by his son’s remarks, Sir Alexander attempts to sway Sebastian’s opinion away from Moll. Later, Sir Alexander hires Trapdoor, a clown, to spy on Moll hoping to catch her in an unlawful act.

During the middle acts of The Roaring Girl , the various subplots come together. The second act opens on a London street and group of merchants.  Viewed as a criminal, Moll is verbally attacked by Mistress. Openwork and forced to leave the store. Trapdoor then approaches Moll pretending to be a friend. In Scene two, Sir Alexander is hiding in a room listening to Sebastian speak about marriage. Moll enters and Sebastian begs her to marry him. Being independent and opposed to the restraints of marriage, Moll denies his offer. Moll leaves with a tailor and Sir Alexander comes out of hiding to express his strong disapproval of Sebastian’s actions. Later, in Act Four, Trapdoor boasts to Sir Alexander that he is about to catch Moll. They have left out expensive items for Moll in hopes to catch her being a thief. Moll does not take the bait and their plan falls apart.

Finally, everything comes full circle in Act Five. Moll becomes suspicious of Trapdoor and discovers his true intentions as a spy. She also reveals that she uses the tricks she learned from past involvement with thieves and cutpurses to protect innocent people who are less aware, rather than for her own gain. In the end, thanks in part to Moll's help, Sir Alexander changes his opinion of Sebastian and Mary’s marriage  and gives them his blessing.